Yes. Yet more of my blathering on!

The previous weekend, I entered into a pact with my diminutive darling, Atilla.

No drinking during the week. No bottles, no nothing. Other than thirst!

I entered into this pact willingly (if somewhat stupidly), but, on the first available evening to break my fast, I wound up being an after midnight taxi service for Atilla!  However, the opportunity to earn brownie points couldn’t be passed up. So, rather than sip a bottle or two, I cash in my chitty and plonked myself on the 37 bus to good old Manchester, my liquid home.

I left the organising of this stroll to Jaz, who took the opportunity to factor in a pub I hadn’t been into since 22/04/2005 (it was a MEMORABLE end to the day, trust me!) and one I hadn’t previously visited. So, at 7 o’clock, I find myself walking along Portland Street and entering the pub I hadn’t been in since my 40th birthday drink……

2 days after my 40th birthday, was the last time we did the “Rail Ale” crawl from Leeds. This pub was where the ‘do’ disintegrated following a contretemps with a BNP St Georges Day outing. The event stays embedded in my subconscious (unsurprisingly!), but I drifted away from regular drinking in Manchester sometime around then. The Grey Horse was a pub I frequented regularly up to that point, a vibrant, often boisterous but always friendly boozer with more of the feel of ‘a local’ than any other pub in Town.

On approach, it was nice to see that one thing had certainly not changed…..lace curtains at the windows! Up the steps into the instantly familiar small space. It’s a single room pub with the small bar to the left and tables snaking around the back wall facing the bar area. The place was packed. That much hasn’t changed either. The Horse is a Manchester drinking institution and has been for as long as I’ve been drinking. The pub is a throwback to the 80s and beyond. I felt like I was stepping back in time.

Jaz was already at the bar and furnished me with a pint of “Winter Cheer”, the Xmas seasonal offering from Hydes. Also on the bar on handpull were ‘Original’ and ‘1863’, both bitters. The Winter Cheer was 4.4% abv and had a distinctive red colour. Being a winter seasonal beer I was expecting some clove or cinnamon spicing with maybe some citrus peel. If I’m honest, I didn’t get much of anything really, a bit of forest fruit perhaps, it just reminded me any number of malty ‘bitters’ from the 80s. Disappointing first beer of the evening. On the upside, there was a bit of a birthday do going on and the raucous singalong rendition of The Drifters’ “Under The Boardwalk” was a thing of joyous beauty!!! The staff were really friendly as well.

The Horse is a truly great place to drink. Just a shame that the beer didn’ t drink great!

Beating the retreat, we headed across Portland Street into the Village towards Richmond Street and……

This pub was recommended to me by Dave, the monocled quizmaster at The Salford Arms. It occupies two floors, but we only went in at ground level. By no means as rammed as The Grey Horse, the bar had a really relaxed feel, a few tables, a couple of comfy chairs and some bench tables at the back. The bar has a reputation for food and the kitchen is on this level. Five handpumps with 2 beers from both Beartown and Redwillow and one from Dunham Massey – all 5 beers from Cheshire micros!

Given my love of ‘The Dark Side’ (and the fact I’d never tasted their beers on draught), I opted for Dunham Massey ‘Dark’

(What IS this vogue for dimpled glasses???)

This is a nice mild, with some hints of chocolate both on the nose and in the mouth. A fabulous brown to almost black beer (as you can see!), reasonably thin in texture as you might expect at 3.8% abv, but a nice smooth drink, more than making up for the earlier diappointment – the stroll was back on track!

and as much as I fancied a shot of Wild Turkey 101 bourbon, duty called, one I was looking forward to as we returned to…….

Having cut through the Village and headed up Princess Street, it was quite a surprise to find the bar sparsely populated. This bemuses me. This bar serves a variety of well kept ales, local micros mostly, has lots of comfy seating and a relaxed air. (Though I’m sure the venue downstairs gets more lively!) I can only think that this is to do with it’s location, just outside the centre and 150 yards from Oxford Road. If only people knew……

First up for me was ‘Redcurrant Stout’ by Clarence & Fredericks (South London brewer). This beer at 5.4% abv is an inviting black ale. A malteser aroma. So far so good….then you taste. Tart! No, I mean the flavour – not me! That’ll be the redcurrants then! Blackcurrants too. Quite astringent from the fruits, but paradoxically, quite smooth feel in the mouth. The flavour (if not the appearance, reminded me almost of a Lambic. A challenging but rewarding beer. Books and covers eh?

Being now my round, I thought I’d play my Joker card! I introduced myself to James at the bar and collected a membership card – there are benefits to this. trust me, I’m a beer doctor! I had a chat with James, bloody nice bloke. We had a bit of a beery and social media chat. I had never been in the venue downstairs so he kindly offered to show me around the club in the basement. A proper small venue that reminded me of 80s live music venues like The Boardwalk. Thanks James!

Anyway, to the strains of great background tunage like Phoenix, Little Dragon and Sleigh Bells, I settled down to a pint of Redwillow Heartless. Comfortingly smooth and chocolatey Stout at 4.9% abv. I’ve written about this previously (see Best Little Beerhouse…), so suffice to say, I will order this whenever I see it. It’s THAT good!

Enjoying oursleves hugely, we decided to have one more. For me, this was another beer from Privateer (previously a first time brewer for me – at The Salford Arms last month). This time ‘Roebuck’ a palish (is that REALLY a word???) brew at 3.8%. As soon as I ordered it, I worried it was a mistake to drop down the abv range. However, this beer improved all the way down the glass. Full of flavour with a really nice malt/hop balance. This would make an excellent ‘session’ beer (for those who do such things – me? Never!). Thanking James and the other bar staff, we headed off into the night toward…… 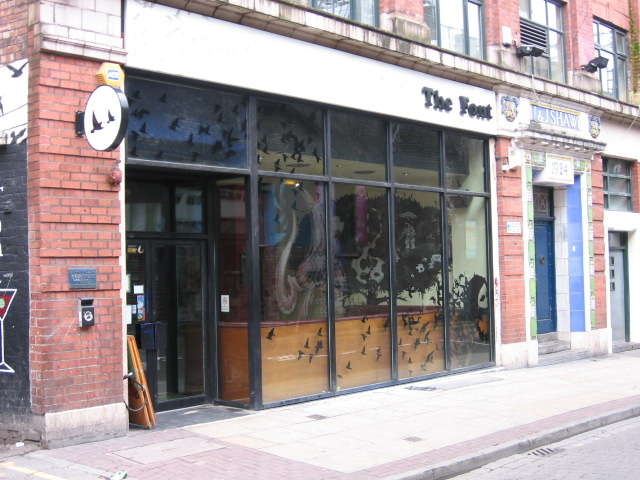 If it was ever going to get messy, this was the place it would start! The cause? Hawkshead XBP, an extra special ‘Imperial’ version of Brodies Prime. 8.5%  abv of danger!

Jaz was up for a pint! The angel on my shoulder told me this was a bad idea, so we settled on a compromise. A 1/2 of Hawkshead each with a pint of something else, Jaz went for the Quantum, I went for the Rapture by Magic Rock. Clutching our two glasses each, we descended to locate a space – blood and sand it was HEAVING!

Described as a ‘Red Hop Ale’ and 4.6 % abv, Rapture has a deep amber/red colour and loads of hoppy flavour. I had this at Port Street a few months back (at a similar stage of consciousness!) and the sharp flavour was superb. Same here. Another superb beer from Magic Rock.

Now the Hawkshead XBP? A lovely slightly sweet, quite nutty and coffeeish beer. Cafe au lait colour to the head, coffee aroma with some hazelnut, a REALLY creamy texture. This is a beer to adore and fear in equal measure! A fabulously dangerous mouthful of dark flavours. Not to be taken lightly, but certainly one to return to…repeatedly!

As usual, Font was virtually full to bursting…4 deep at the bar…lots of cocktail shaking going on. The CAMRA Card discount makes this place ludicrously good value for Manchester. 3 pints for £8? And one of those at 8.5% abv? How do they do it? Must be MAGIC! The usual great tunage (some classic old school hip-hop !) and a queue to get in. Reminded me of The Hacienda back in 1982! (But without the good beer!)

If you’ve read this blog before, you can guess what happens here! Paramount Porter (aka Elland 1872). Creamy, dark, roasted, dangerously moreish and (at 6.5% abv) probably ill-advised! But sod it, I don’t get out THAT much really, do I? The evening was descending into madness by now, but, with 1/2 hour to spare, we nipped into the other local ‘Spoons,

The Waterhouse, but….memory fails me! Ah yes, Saltaire New World Red. Red ale, nicely sharp and bitter (owing to mix of hops from Oz, US and New Zealand). 5.2% abv and my nightcap of choice this evening! Just as I started to settle, that angel on the shoulder reminded me that the last bus was imminent………quick step, then the 37 home! I hope my drunken tweeting made sense!

Oh, for a change, all my worldly goods got home this time! (Wallet, Phone etc….long story!)

On that note ….. Until next time (probably near The National Winter Ales Festival)