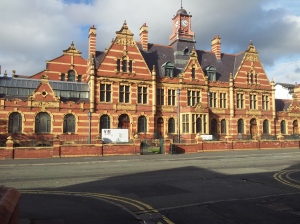 (The Splendour that is The Victoria Baths)

Doing this bloggy type thingy, one of the first things I wrote about was The Independent Manchester Beer Convention or IndyManBeerCon. A Beer Festival revelation, not only featuring some of the best beers that the UK had to offer, but held within the legendary Victoria Baths on Hathersage Rd. I remember getting my first drink and taking 45 minutes just to drink in the wondrous surroundings. The building may have been in need of substantial further refurbishment, but (and I don’t use this word lightly) I was awestruck. Stunning stained glass windows, beautiful balconies, lots of almost secret rooms. Ohh…….

Organised by the people behind Port Street Beer House, A Place Called Common & The Beagle, I was chuffed to bits to hear that the sequel was to have the same location. Another opportunity to say WOW!

For 2013, The “Convention” was to expand into 4 days from last years two. That was to be expected. Last year was incredibly popular, rightly so. The combination of the excellent beers, superlative “Street Food” and that oh so sumptuous location was a winner from the moment the doors first opened. Last year, I attended as a punter on the Friday and worked the bar on the Saturday. It was, quite simply, the most fun I’d had with my clothes on!

I had to ask myself, “Could they better last years’ effort?”

I assisted with one of the “Set Up” sessions on Tuesday. Partly (let’s be honest!) for a free session ticket. However, my main motivation was to see what the place looked like BEFORE the “beer locusts” arrived on the Thursday evening, draining everything in their path!

(Room 1 – The beers had just started to arrive)

The logistics of this organisation are simply boggling. Before the beer started arriving, the first job to do was washing and drying glassware. And there was A LOT OF IT! Just as we got started, Magic Rock and Marble arrived with their beer deliveries. Magic Rock had their own room (the room in which Brewdog were located last year), so that was easy. The Marble beers had to be delivered to their bar which was in room 1 – thank the gods for cask carriers! 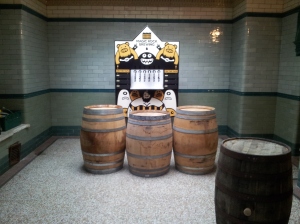 (No. Those are empties. Is it just me, or does this look like a shrine?) 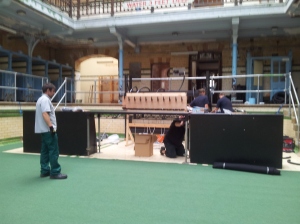 I enjoyed this hugely. Met some nice volunteers. Got to meet Claudia, Duncan, Rosie and Jamie from the Port Street empire (nice to put names to faces that you see so often!), it was just, FUN. 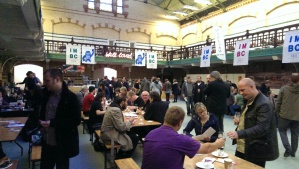 I hate being late. Especially when it’s my own fault. However, I couldn’t turn up covered in emulsion paint, could I? Trust me, It is NOT a good look! So, by the time that Jaz (Arch-Nemesis), Chris (Sacrificial Lamb) and I got in, the place was already busy. Having not eaten since breakfast though, first priority was food. The Meat Paella from Las Paelleras fitted the bill. Lots of lovely beery soaky plump rice grains with oodles of paprika and chorizo and chicken……drool……superb value at £5.

Firstly, with the beer, we need to talk about the measures. These are all priced for the 1/3rd of a pint. As you enter the building you pay/show your ticket, and are given a beer menu for that particular day. You are also given a stemmed glass marked with a line for the 1/3rd pint measure. Trust me, this works. The glass is lovely and delicate (Translation? Easy to smash on the way home!). This measure gives you the opportunity to try more beers. Personally? I just think that it’s more civilised than swilling pints!

At the bottom of the beer list is a wee map, showing where the various locations for functions are located. After a few, trust me, it would be easy to get lost whilst admiring this gorgeous interior!

First beer of the evening had to be light in alcohol, refreshing and hoppy. Quantum NZ Light at 3.6% abv was all that and more. Pale gold, fruity hop nose with the flavours of kiwi and passion fruit in the mouth. Tasty and damned refreshing. Having sat down to enjoy my Quantum with the paella, I was struck by the music. The sound of saxophone. And there they were, up on the balcony. Live music, nice touch. (Of course…if I had been paying attention to the website….)

It was getting a little busier at the bar in room 2, but service was till swift, so I stayed in here for another. Beadica’s Well (Barrel Aged) by Thornbridge. Whilst I hardly have beergasms over Thornbridge’s pale output, the darks generally rock my world. This was no exception. Black with a light creamy head. Smoky wood and toffee nose leading to more woody smoke, some treacle notes with some warming spirit drifting up your nose. Performed the trick of tasting above it’s relatively moderate 5.3% abv strength.

Next came a walk into Room 1 to sample one of the IMBC Collaboration beers. Farmhouse IPA with Marble Brewery. At 7.4%, for the price of just a single token, this was a bargain! First on the nose, I got  quite hoppy notes with some yeasty Belgian funk. But in the mouth, the Saison character takes over. Quite spicy, yeasty and with a touch of peachy fruity sweetness. Superb.

Into Room 3 now for something a little different. Tea Saison from Buxton Brewery. Made with Cherry and Cranberry fruit teas allegedly! But where fruit teas can be a flavour let-down, this was anything but! Really tart and fruity aroma, the taste was akin to a Kriek, tart and mouth puckering. Really fruity and tart/sour with a finish that was sharp and as dry as a bone. Probably my second favourite of the evening.

Venturing into the Turkish Baths room now for a Dark Arts by Magic Rock – Kegged, therefore slightly too cold for my tastes, this is still a damned tasty strong stout with a firm dark roast malt body and the spiky flavours of bitter chocolate and coffee. A really good beer. Here is where I firmly come down on the cask conditioned side. Texture and temperature. I just think that cask (for me) wins hands down. Do I have all knowledge? Do I bollocks! I just happen to believe that cask conditioned, Dark Arts is a classic and one of my all-time favourites. On keg, it’s simply a really nice strong stout. And cold.

At this point, I went for a looksie into Room 3 where there was a band playing. They were called All We Are, and, if it wasn’t for the fact that I was in company, I could have listened to them all evening. They sounded simply superb.

Back to room 2 now. Weird Wit a Black Jack Brewery collaboration with Weird Beard of Hanwell, W London. At 5% this was hazy gold with a gentle fruity aroma. This got going when it hit your taste buds! Quite full-bodied for a 5% beer, fruity, you could taste the melon as well, but this was simultaneously quite bitter with a marked resinous finish.  tasted a bit like a hybrid of a saison and an IPA. And in a VERY good way!

Stepping up on the abv now, next up was Blackberry King of Clubs by Black Jack Brewery.  Black and really fruity aroma. This was full of blackberry flavour. A full bodied dark roasted stout full of bitter coffee, chocolate and tart berries. Joint Beer of the Evening in my book! Along with…

Oh yes! From the moment that I saw this coming into the building on Tuesday, I just HAD to have some! Imperial Treacle Stout by Quantum (IMBC Collab beer) It says 8.6% on the menu, but 9.1% on the clip. Ooooohhhh smoke me a kipper, I’ll be back in time for breakfast! Unctuous, silky, oily and oh so bad for you. I REALLY don’t think anyone else should touch this beer. Leave it all for me. There’s a love! Black, alternately sweet with that gooey treacle, then bitter, then fruity. It was just soooo good, er…I mean terrible……er…Just leave it all for me. OK! Young Mr Krause has played another blinder! Cheers Jay.

To be honest, I took it really easy last night. I just enjoyed myself. Long chats with Peter (aka Tandleman) and his lovely lady Eileen to whom I could listen all evening dispensing beery pearls of wisdom (Eileen, of course ;-)) and some cracking chats with Matt from Privateer Beers (should have had his Dark Revenge here, CMON!) and his lovely friends Helen & Maria (I think?). Matt may be moving his brewery soon and it was nice to see him, especially talking positively about the future of the brewery. Helen has connections with the West Riding Refreshment Rooms at Dewsbury Train Station, a place I love of old. Long chat with Helen, birds of a feather views wise.

In summary. The venue is stunning. The beers were excellent and (mostly) well priced. The food was superb and laid on by the Guerilla Eats street food collective. The entertainment was first-rate (I don’t recall music last year?) The PSBH empire have raised the bar again. I could wax even more lyrical, but there are others more eloquent than I who will do that far better.

There is room to breathe – unlike most other fests. Room to chat (and be heard). It;s just civilised.  I enjoyed myself so much, that I completely lost track of time! So much so, that I finally paid attention to one of Matt’s (Privateer) prompts and realised that I had just over 10 minutes to get to Piccadilly and my last bus home (the look in Jaz’s eye indicated that his futon was NOT an option!)

Back to work there  (hopefully behind a bar) later – say hello. I’ll (probably be the oldest bloke behind the bars! And no beard!!!)

I’m hearing that there are still some tickets for Sunday going. Do yourself (and your taste buds) a favour. Come on down. Good food, great beer and a SPECTACULAR venue – worth the entry fee alone. Check http://www.indymanbeercon.co.uk/ for details!

On that note (and this may be further added to on Sunday!)…til then