This morning (this was originally drafted in June 2019), I read a post by Jonny Garrett in Good Beer Hunting. Now this isn’t a magazine I read regularly. But the title of the post dragged me in.

“Credit Where Credit Is Due”

The opening line was almost apocalyptic.

“The British craft beer industry is a “house of cards” built on crippling levels of debt,”

One of the things I remember most clearly from my early days of blogging – and being lucky enough to talk with brewers – were their key concerns.

Chief amongst them was Payment. Closely followed by the return of hardware, namely casks & kegs.

Early on in the (ludicrous word) “planning” of the first Independent Salford Beer Festival, the two things I promised brewers were payment within a week of banking the receipts and the availability of their casks (the first two years being cask only).

A long time ago, I worked for Customs & Excise. I enforced VAT debts. I was the guy who would turn up in pubs, cast my eye over the fixtures and fittings and politely – yet firmly – advise the publican as to the small amount that they would fetch at auction. And the consequences of non payment.

(Removal and sale of all owned fixtures and fittings. Followed by court to recover the rest of the outstanding debt)

I didn’t sympathise. I’d already explored other ways to sort the debt. I was doing them a favour. These were cash businesses. Badly run, or (for some reason or other) simply not working. And I (for my employer) was simply being humane.

Now. There’s the thing. Pubs ARE cash businesses. Speaking as an outsider, I understand “business”, but what kind of business – and reputation – are you going to have, if you repeatedly don’t (or delay to) pay your suppliers?

I remember a conversation with a local brewery owner, about outstanding debts. And how all the payments owed would pay for ongoing expansion. Rather than finance.

And it’s not just that. Many people depend on these breweries, staff wages, suppliers, they all need paying. People’s livelihoods. Many of those are friends.

I look around bars in Mcr – my obvious reference point – and see Freehouse bars with no local beer on. Having seen some previously. And get to thinking “non / late payers?”

This post was going to remain in the “draft” folder. Until I saw this…. 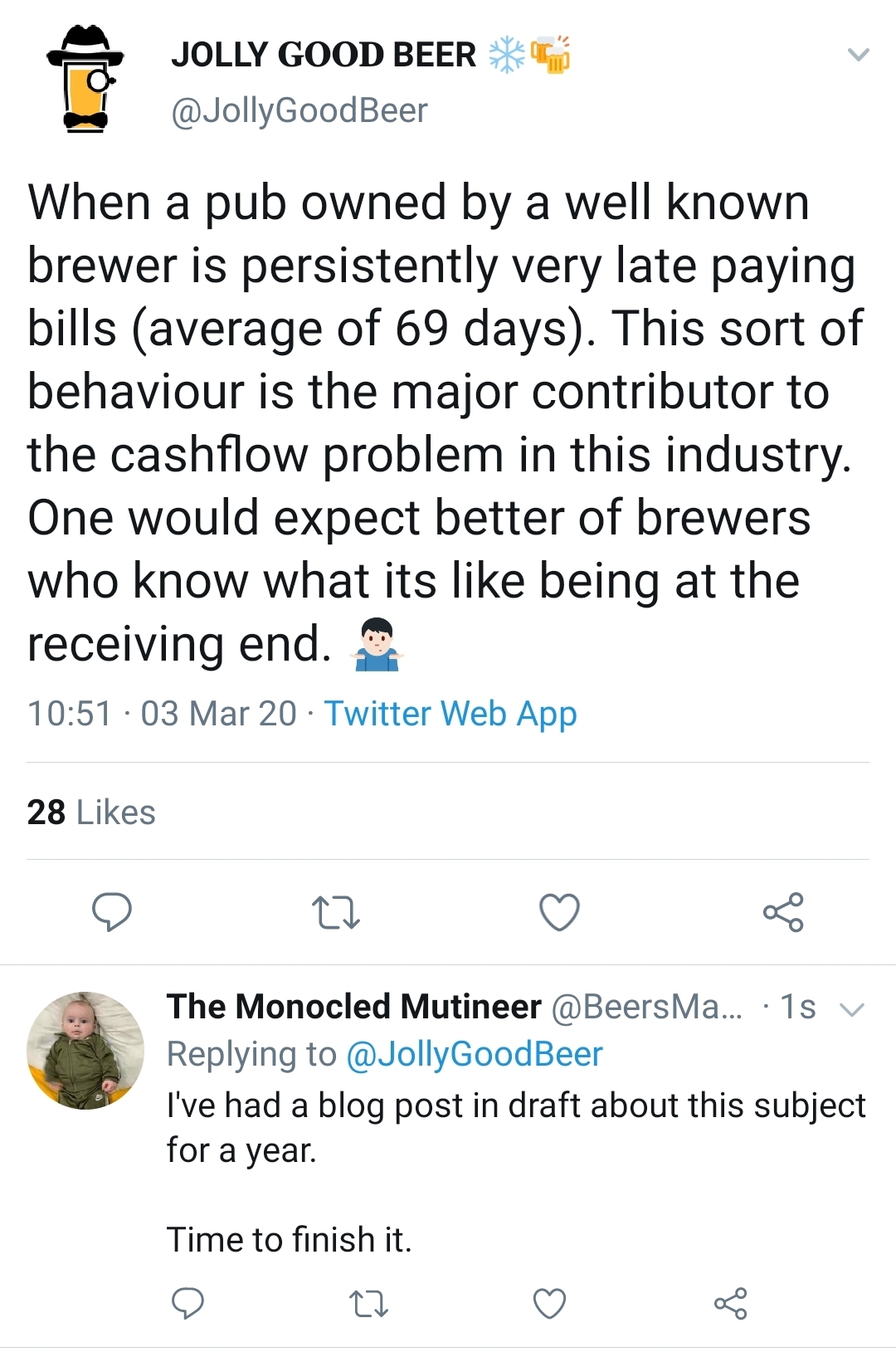 I am a supporter of independent breweries that make quality beer. I demonstrate this personally both in my purchases across a bar and in the event that I organise (The Independent Salford Beer Festival).

As a personal customer, I pay across the bar. As an event customer – this year – all suppliers were paid within 5 days of the end of the event. This is how you gain respect from your suppliers. Quite simply put…

You pay them. On time.

It really won’t take long for suppliers to stop supplying if they don’t get paid.

I’ve heard all the stories from Brewers about chasing tails. For overdue payment. Amounts like £500 may not seem like much in a business sense, but, for small breweries, amounts like this not being paid are critical.

It just takes two or three amounts like this being owed to send a small business (like a brewery) under.

Companies like Jolly Good Beer do fabulous stuff. I’ve seen the assistance they – in particular – have given to bars in terms of installations with “direct draw” (the set up at Stoneworks in Peterborough is ACE!) They shouldn’t be needing to put out messages like this

I’m not religious. I’m certainly no biblical scholar. But there is something about the phrase “Do Unto Others as You Would Have Them Do Unto You” that I’ve always tried to live by. In all respects.

You get what you give.

Yes. I get that there are others to pay.

Yes, I get that “the VAT man is a right bastard”.

I WAS that right bastard.

But, you know, like I said, it’s a cash business.

Do Unto Others, eh?

(and don’t get me started about casks……) 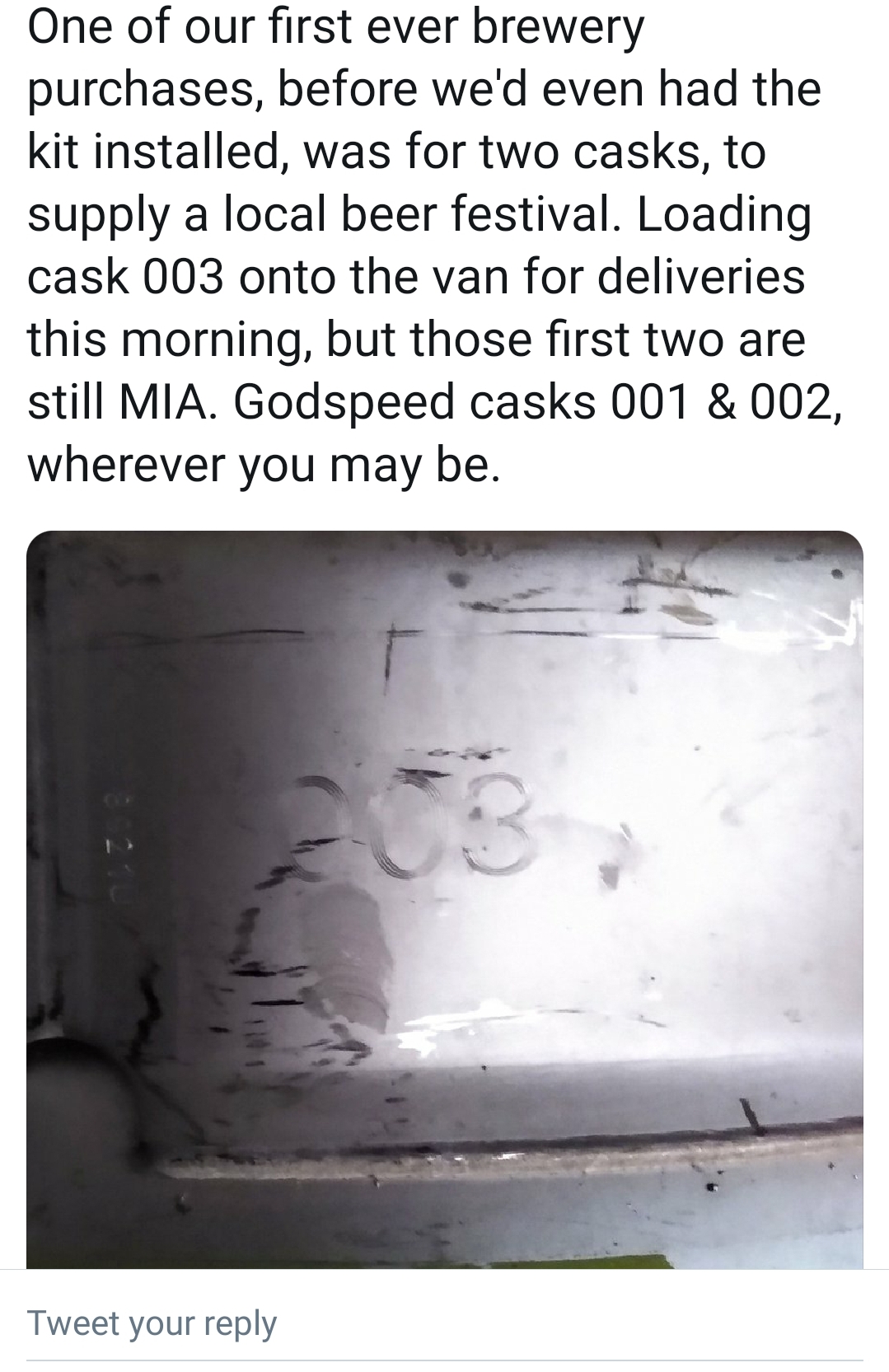 Be kind to one another.