The Vultures Are Circling – The Spreading of the Propaganda

(This is a draft that has been sat in my folder for a while. And I wanted to get rid. Because it’s a metaphorical splinter in my heel) 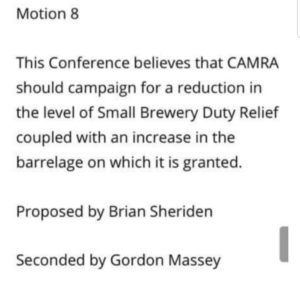 That cosy and mendacious coagulation of self – interested large breweries who want to line their own pockets at the expense of their smaller kin.

The above motion – rightly rejected by the 2018 CAMRA AGM – was drafted and proposed by a self-confessed admirer of family brewers and their traditional outlook on beer. He wasn’t a fan of Micros, it’s fair to say that about Brian Sheriden. As you can see…. 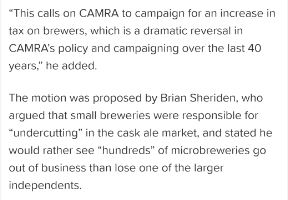 If you want to see what “undercutting in the cask ale market” looks like, try Wetherspoon. A chain within which there are no lack of SBDRC member produced beers.

But. Just when you thought you were safe to think progressive thoughts…… We get this. Now then. Curmudgeon is an opinion piece column that features in the Stockport and South Manchester CAMRA magazine “Opening Times”. And let me be clear, I am a fan of Opening Times. It’s an excellent read. Its editor likes to have a sense of balance – which is completely laudable.

But – after an amnesia inducing amount of beer the evening before – my goat was well and truly “got”. My piss was boiled. To put it mildly. 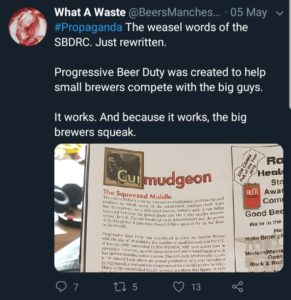 And the editor – fair minded as he is – invited reply. So I did. And he published it… 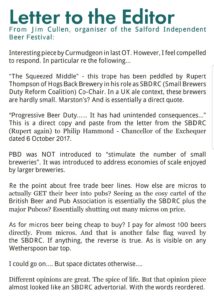 And I was reasonable. And restrained of vernacular. But THIS is my space. And I can vent.

What I say on these virtual pages are MY words. I own them. For good or ill.

What boiled my piss was the apparent “cut and paste” nature of the comments in this piece above.

Cut and pasted from documents and statements vomited by the SBDRC themselves. And – in particular – Rupert Thompson, Co-chairman.

A trope repeatedly peddled by the SBDRC to gain sympathy for their “plight”. They compare themselves with this phrase to the international behemoths that they are ACTUALLY in bed with in the British Beer and Pubs Association (henceforth BBPA). Think Heineken.

They’re NOT “The Squeezed Middle”. They are a coagulation of Britain’s largest breweries. Let’s get this straight.

Don’t forget, not long before they sold to Asahi, Fullers themselves swallowed Dark Star. The only UK brewery to make such a purchase… NOT the sign of a company on its uppers…..

“….however, as with many such well intentioned measures……it has had unintended consequences” (the words that I have italicised are the ones that hooked me in….)

(I’ll let you make your own mind up about THIS lift – from a letter from Rupert Thompson – co-Chair SBDRC to Philip Hammond MP, the then Chancellor of the Exchequer)

“Progressive Beer Duty was introduced by Gordon Brown………… to stimulate the number of small breweries…..”

(I’ll let you make your own mind up about THIS lift too – from the same letter from Rupert Thompson – co-Chair SBDRC to Philip Hammond MP, the then Chancellor of the Exchequer)

It wasn’t. It WAS introduced to enable small brewers to compete – price wise – with the likes of Fullers who could utilise their purchasing power and economies of scale and still beer at a lower price than Micros could.

And this worked. So well that it had the side effect of encouraging more people to set up small breweries. Resulting in the number that we have now. A number celebrated by all. Except the SBDRC, BBPA & IFBB (“Independent” Family Brewers of Britain)

“In practice, some of the small brewers have used the duty relief not to bolster the finances of their business, but to sell beer more cheaply…..putting the “established” brewers at a severe price disadvantage.”

Jesus may weep for the SBDRC. But I won’t.

Firstly. To “sell beer more cheaply” (read “compete”) was the POINT of the original legislation. The above phrase is merely a matter of dark spin. What the SBDRC and their propagandists are most excellent at spouting.

Not that I’d call “Curmudgeon” a “corporate shill”. I’m not clever enough for such phraseology. 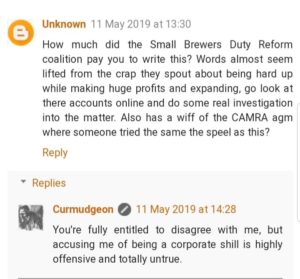 (Just for the record, that WASN’T written by me! I don’t hide)

“Curmudgeon” posts his columns on his blog (or the reverse into OT – I can never quite tell the order). I do read his OT column occasionally and – like the rest of OT – his columns are occasionally provocative, mostly personal to him and sometimes make unarguable points.

However, when you appear to spout the rhetoric of the SBDRC, appearing to quote (almost verbatim) their slanted mendacity, you are open to challenge. I don’t know what a “Corporate Shill” is. But I’ll check my dictionary. And if I’m right, I’l be only too happy to arrange a cap fitting session.