The Vultures Are Circling : Cosy Clubs, Cleopatra’s Asp And Negative Marketing – The Spinning Webs of The SBDRC

PLEASE NOTE: All the information in this blog piece is either freely available on the internet or extrapolated from that information. Some of it is direct results from a Google search, some of it from Companies House, some of the harder to find information is from direct quotes to trade publications where the breweries concerned were happy to brag to journalists about growth in one article whilst complaining about competition in another.

Some of it of course – figures wise – is based on my own calculations!

I like audacity. But some instances just boil my piss.

Just when I thought I couldn’t GET more angry, I saw the above piece.

Why am I so pissed? Hogs Back Brewery. Launching beers. At Craft Beer Rising in London.

You see, Rupert Thompson, Director of Hogs Back is one of the main voices (if not THE) of the Small Brewers Duty Reform Coalition. You know, that cosy cartel of large and family breweries that are intent on making Micro Breweries less competitive. On getting them closed down.

So they can increase their collective share of the UK beer market. They see the “Craft” segment increasing in share, whilst the overall beer market shrinks.

They want a bigger piece of the pie.

To my uneducated eyes, it had all the appearance of Craft Cleopatra clutching the asp to her breast. Except in this case, Cleo has forgotten that the asp has poison in its teeth. And is desperate to bite.

You see – again, I’m a bit thick maybe – this invitation to the enemy into the centre of the “craft” camp, giving them (in Hogs Back’s case) a platform to launch a beer range…… I mean, there may be high level conversations backstage – within the event – that could bear fruit…..Bollocks. I’m not even kidding myself!

You see, Rupert Thompson and his co-conspirators don’t strike me as being about to negotiate with their prey. This is a bunch of hard headed businessmen..

Rupert (for instance) has been a Director – at various stages of a number of different beer companies (Note. I don’t say “breweries”) In his own words, he describes himself as… 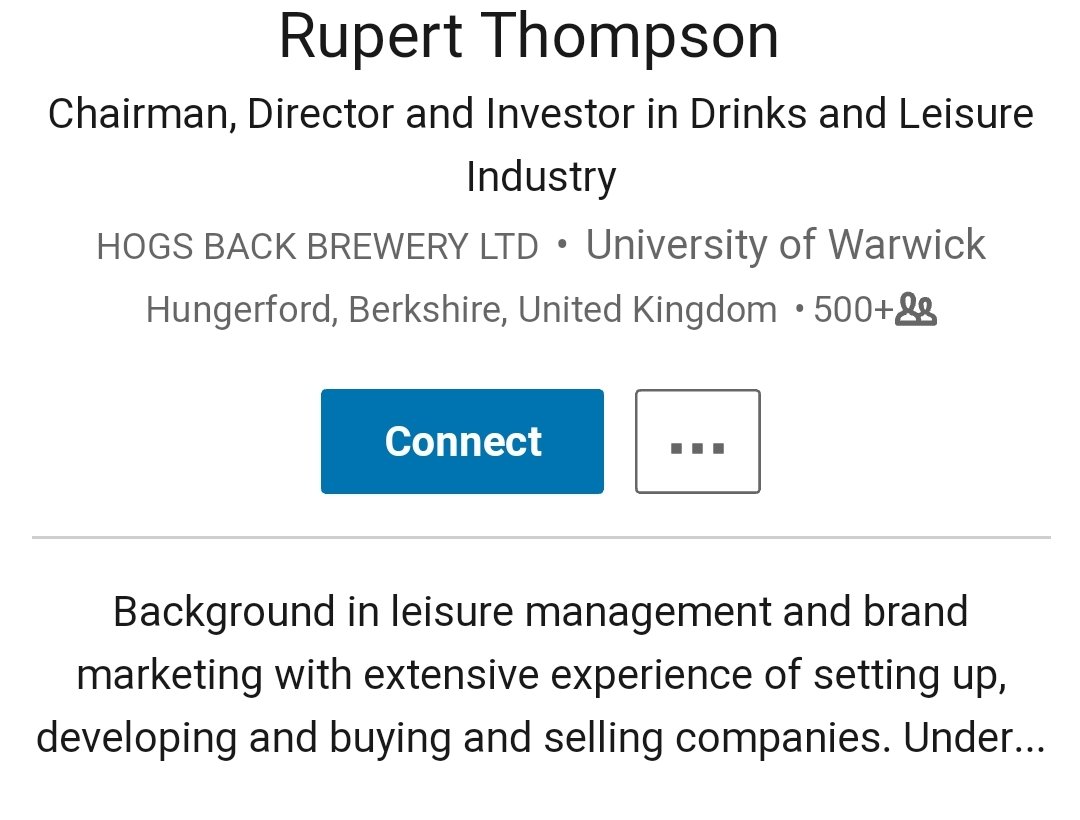 As I said, Mr Thompson is arguably THE mouthpiece of the SBDRC. Note the signatories to this letter to the treasury. These names will come up again…. 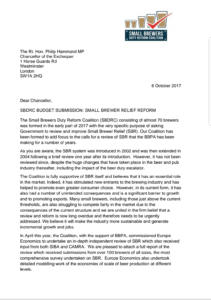 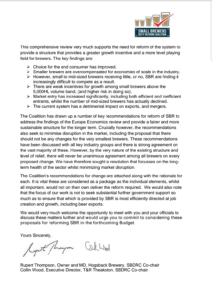 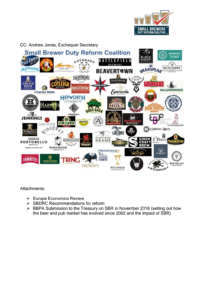 Now, remember those signatories above?

Now then. The BBPA. The British Beer and Pub Association. And those mendacious representations of the 3 separate bodies (Inc the Independent Family Brewers of Britain) all making “common cause” on the subject of duty relief to small brewers.

Co-Chairs of the SBDRC. Rubbing shoulders with Heineken. And Marstons. On a BBPA “Small Brewer Relief Working Group”

Like inverted Robbing Hoods, Stealing from the Small to feed the Big. And pretending that there are 3 separate bodies campaigning to reduce relief to REAL small breweries.

(please note : so far as I’m aware, CAMRA does not actively support the aims of the SBDRC)

Rupert is the fella who grew the Carling Mega Brand, marketed Old Speckled Hen as a “premium brand”. That’s what Rupert is. A marketer. Hence his incredibly skilful work at the helm of the SBDRC. And you have to tip your hat. He’s good.

“The coalition is fully supportive of SBDR itself and believes it has an essential role in the market….” yet then spouts the key mantra that…

Let’s nail this ****** down, right now. I know lots of Micros personally. I KNOW how much beer costs. And how much it costs to make. And – at the smaller ends of the scales (ie Those below the vital mark of 5000hl) – it IS more expensive for a small “flavour forward” brewery to make beer, per HL.

Small Brewers Duty Relief allows Micros to compete for bar space. But while Big pubcos (some of whom, let’s not forget – Punch, Enterprise Inns, Heineken – are not exactly disinterested members of the BBPA!) control vast swathes of the market and drive down prices, that space is hugely limited

The SBDRC (and Rupert and his jolly chums at the BBPA and IFBB) can get their tame survey team to concoct and manipulate stats all they like. But their well funded, well oiled and well practised mendacity cannot be allowed to stand.

They are the enemy. And they need to be recognised as such.

This. The attack on Small Brewers Duty Relief is the existential threat to what is on the lines at your favourite bars and pubs, that choice that you have.

Because if these people get their way. They will go in a flash.

Get informed. Get involved.

Gratitude and Debts Chasing The Dragon (And Other Phrases…)