The Vultures Are Circling. Again.

“Just when you thought it was safe…….” Here go the Small Brewers Duty Reform Coagulation. Again.

Forget the ABInbevs, Molson Coors of the world. In a UK context THIS is Big Beer. Big Beer with all of the PR and spin merchants that it can throw money at. All with the aim of increasing market share. In a declining market.

And using their access to the ear of Government to state their “case”.

If I hear the phrase “level playing field” one more ******g time I might just howl.

You have to admire “Big Beer 2019”. With its pretty websites and finely “crafted” phraseology. All with the ultimate aim – openly stated or otherwise – of closing down the competition. The small guys. The Micros that you and I know and love.

In the name of shareholder dividends and balance sheets.

This is about Progressive Beer Duty. And Big Beer UK’s simultaneously shadowy yet naked attempt to grab a bigger piece of the pie. At the expense of – what I regard as – the golden age of choice and beer diversity.

So. Let’s look at the Small Brewers Duty Reform Coalition

You’ve got to admire their transparency….. Oh. Hang on a minute……

When this all kicked off last year, there was a list of breweries that signed up. Very quickly, some of the breweries who signed up – not knowing the full agenda – quickly withdrew. Recognising the effect that “pulling up the ladder” would have on others (including many friends) who were on the rung that THEY were on not too long before.

Having been privy to the letter at the top from H M Treasury (received by brewers this week), I thought I’d have a look on the SBDRC website, just to see who the members were now. Now that their true colours are revealed.

So. Being a cheeky wee scamp, I followed the trail of breadcrumbs to a contact email address…. 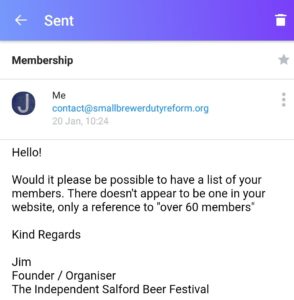 As you can imagine, I can count the number of replies on 0 fingers. That’s almost 3 weeks later.

Some of their PR /Propaganda is quite shameless and – to put not too fine a point on it – so far from the truth to be actually l… (am I allowed to say “lies”?) 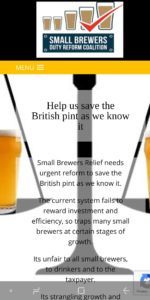 “Its unfair to ALL small brewers…..” (I left the apostrophe out) 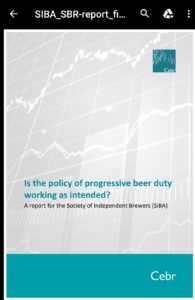 I don’t mind saying that this is a right dry bastard of a read. (If you – like me – are an insomniac, type “Small Brewers Duty reform report” into Google, you’ll find it. Sleep well!) But my inner stats geek loved an hour staring at pretty graphs and tables…. 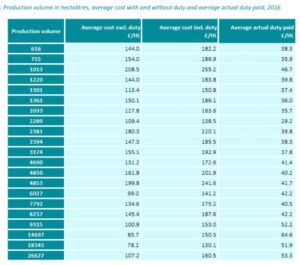 In essence, this table demonstrates the cost of making beer relative to the size of brewery. And demonstrates the economies of scale that larger brewers have. That it still costs more – even including the reduced duty rate – for small brewers to produce beer.

But no. Our friends in the “Coalition” won’t, can’t, say that. That would demonstrate a levelling of the playing field. Precisely their argument, but thrown back.

Last year, the “Coalition” were talking about reducing or removing the relief from duty for brewers above 1k hectolitres – a hectolitre being 100 litres. Or 2 1/2 9 gallon casks.

Do the maths with me here.

If an average (let’s say 6 or 7bbl) brewer brewed 3 times a week at full cap. Giving a 4 week break (yes brewers, I know that it’s dreamland in terms of hols, but…) that equates to just over 1612hl. If that brewery brewed 4 x per week that is near 2200hl.

Under those terms, that brewery would be paying 50% more duty on those 1200hl above the original SBDRC level. 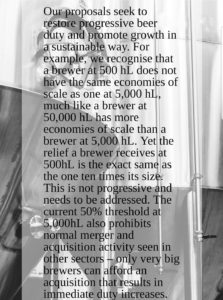 Let’s be clear. Some breweries that YOU know, will be at THIS moment, clinging on. Getting beer into pubs is NOT easy, especially in a market dominated by big pubcos that demand beer at the lowest possible prices. Prices that “Big Beer” can (and do) supply at. Just look at any Wetherspoons bar….

This relief was introduced by Gordon Brown (as Chancellor) in 2002 in order to provide a boost to growth in the Micro Brewing sector. The stats don’t lie. And we have all seen the explosion in numbers of breweries in the last 6 or 7 years. This growth of numbers would not have been possible without SBDR. I quote the CEBR report again….

But that net growth has slowed massively.

I must confess that I worry about new market entries in brewing. It’s very difficult to make a “splash” in this market. For every standout opening like Pomona Island, there are many who don’t make that reputational impact.

And making a reputational impact is all well and good. You still have to sell beer. And compete at the bar, with those very breweries that are seeking to “do your legs” with their ability to sell beer cheaper into the chains and into wholesalers.

And I’ll never forget looking at a young enthusiastic and ambitious brewer in Manchester a few years back – one that was seeking to expand – and asking “Why would you do this?”

I hated not being more positive. I truly did.

I’m not a writer. “I’ve never took a paper or a learning degree” I’ve got no stake in any brewery, other than emotional. The only self interest I have (if any) is the ability to source fabulous beer from the best available independent breweries in the UK for #ISBF6….. #ISBF7…… But be under no illusion, by their own words (re “mergers and acquisitions….”) the Vultures of “Big Beer UK” are Circling.

If the Vultures of the SBDRC get their way – and the Treasury reduce or remove the level of relief for those breweries below that magic 5000hl – the brewery landscape that YOU now love and treasure, those breweries whose excellence allows me to put on #ISBF, will be picked clean to the bone.

What I, WE, love, this “Golden Age” of beer, is under threat.

Historic Pubs of Manchester – Pt 5 : The Collected Classics The Vultures Are Circling – “The Squeezed Middle”