I recently checked some old posts and realised – horrified – that it had been almost 5 (FIVE!) years since the last time I wrote of my enduring love. Beautiful old Manchester pubs

So I was pleased that this date 26 January has been fixed in the calendar for some time.

You see, as much as I adore fabulous modern beer, it’s the pubs that get me. Architectural delights. Friendly chatter. Warm atmospheres. These things matter. They are – in my opinion – more important (WAY more important) than the cheap thrill of dodging that FOMO moment. That pseudo sexual melting in the throes of a deep dark Imperial Stout.

Pubs matter. Especially when they continue to close at an alarming rate. And – to quote Joni Mitchell – “You don’t know what you got till it’s gone”

So here I am. On the final morning of the Manchester Beer and Cider Festival. Dodging the crowds.

For a personal delight.

This place kind of epitomises the idea of Classic Manchester Pubs. Manchester has a whole bunch of pubs built and trading continuously since before Peterloo. But none with such an intimate connection.

I’m sure I’ve read somewhere a story saying that people sheltered from the massacre actually inside they pub – but maybe that’s false memory syndrome.

What – for me – struck home yesterday is that this is probably the most beautiful pub in the city.

Three rooms. All equally beautiful. The corridor to them wrapping around to the rear of the bar from the entrance. With the two rooms to the rear. All rich reds and decorative details.

And – for someone who has been in this pub repeatedly over the years – surprises lurk around the corner. In (arguably) Manchester’s finest beer garden.

The real fires in the rear rooms are a winter joy too – if not always lit. 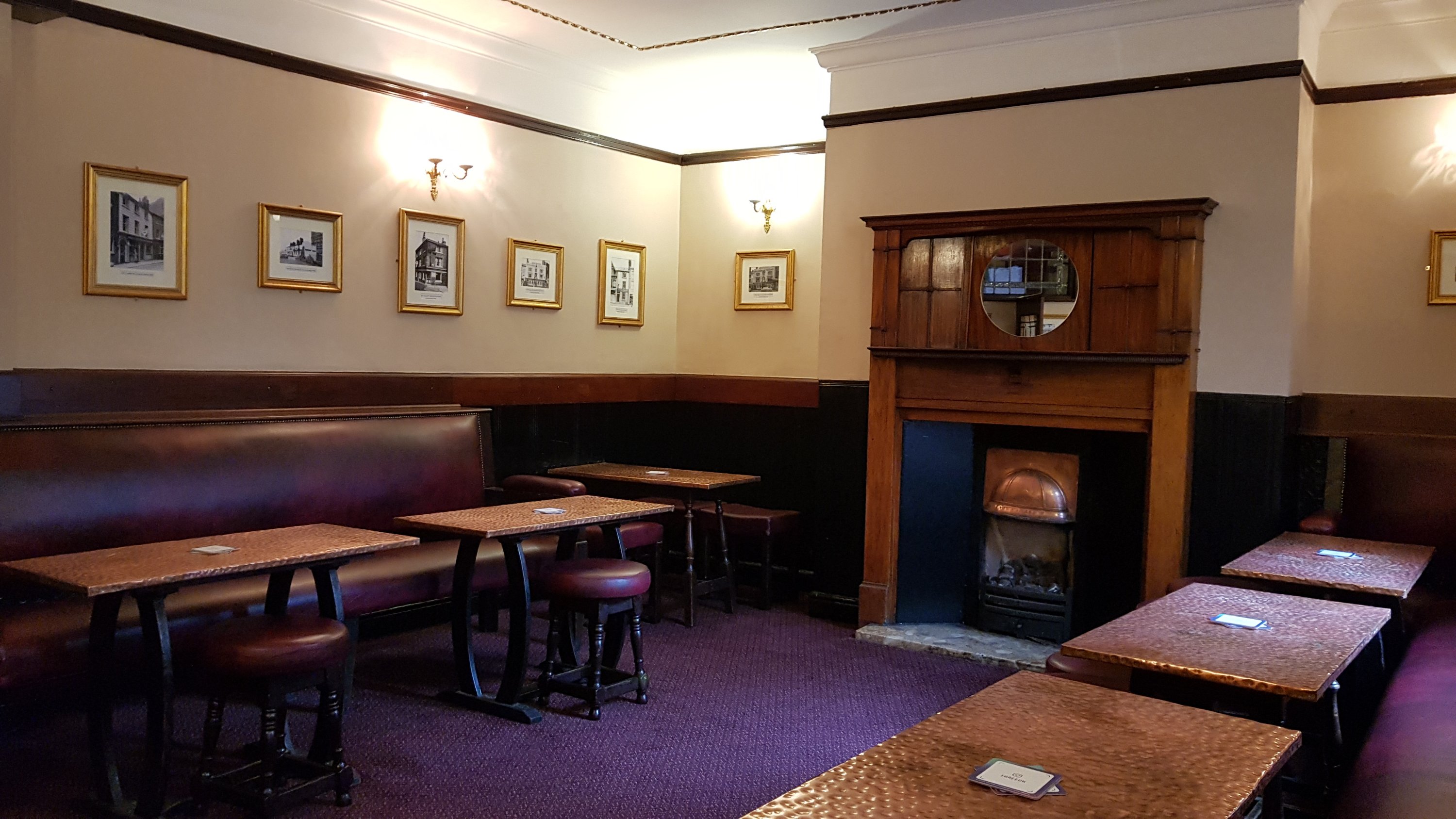 The really big surprise for me was the beer selection. What was previously the province of large regionals, somewhat lacking inspiration, here were breweries like Revolutions, Night Jar and a few I’d never seen before.

Smiling, I grabbed a “Candidate” by Revolutions and settled down to wait for my fellow walkers.

Delicious and refreshing, I was gutted to learn that it ran out shortly afterwards. I do like Revolutions beers, tasty and dependable and it’s nice to see them in the BP.

Being joined by company, beers being finished, it was time to exit with a smile on my face and turn right, cross the road and – having walked all of 50 yards – turn left onto the Chepstow Street.

To a place which is the place where drinking real ale started. For me at any rate…

The Peveril of the Peak

The story has been previously told. In early 1982, this was where I had my first encounter with real ale. The first time I went “Ohhhhh….” and put the Carlsberg down and ordered a Wilson’s Bitter.

And never looked back.

In my early drinking days (mid 80s), this pub was a regular fixture. Good beer, solid jukebox, table football (if you call it “fussball”, the sea is 35 miles due west)

Again, 3 rooms – a small and intimate/cozy room to the right behind the bar, the largest to the left and the bar room itself.

Lots of stained glass and wood, some photos on the wall of celebs who’ve drunk here (my favourite being Robbie Coltrane) and a general sense of warmth and welcome.

For me, again a nice (mostly localish) beer selection was a surprise. My last visit ft the usual macro range (plus the ubiquitous Taylors Landlord – I don’t subscribe to the prevailing love affair…) so it was nice to see Millstone & Brightside feature.

The “Tiger Rut” by Millstone was a delicious and refreshing session Pale with just the right balance of malt and aromatic hops. Not had this in ages. A bloody good beer from a frequently overlooked brewery. No longer.

This early 19th century pub is a Manc classic. And worthy of adoration. Go worship.

Bloody hell but I’ve been drunk in here. A frequent terminus of many mid 80s work outings – or the last pub before The Cyprus Tavern (ah the memories….)

A stalwart of the Manchester Beer scene for all my drinking days and – again – frequently overlooked in favour of easier pleasures. But you’d miss out.

Converted from a town house in the 19th century, this place can get busy in the evenings with office workers from nearby buildings. And deservedly so.

Two main rooms with two entrances to the pub. The single door to the left takes you into a corridor at the rear of the bar (frequently the easiest point of access) with the double doors to the right leading immediately into the bar.

The room to the rear feels larger being slightly longer and features more seating. I felt fortunate that we could grab seats, not always the case in here.

(A caution from Hilaire Belloc)

This pub is also famous for its drink related philosophy written on the walls…..

Having just had the Millstone, the Moon Rakers Mild by Empire (from Slaithwaite nr Huddersfield) seemed a good shout. And hell but it was!

Just raising it to the nose for a sniff was a chocolate joy. Rich, gentle roast, with cocoa and chocolate. Unusual to see a mild in January, of maybe I’m just going in the wrong places.

Whatever. A belter of a beer.

As a raucous group of good timers were reaching a crescendo in the next room, it was time to leave… And move on

So, right out of The City Arms and left onto Fountain Street then right onto Booth Street crossing Mosley Street onto Nicholas Street up to Portland Street. Turn right and about 50 yards up, you will find another Manchester classic.

Intimacy. That’s what you get in The Circus. That and the feeling that you are being watched by George Best. His bloody image is everywhere!

And Bobby Charlton. Denis Law. Matt Busby. And sundry celebs who have had a beer over the years in this tiny watering hole. A place that used to close its doors early evening at weekend. It gets full very quickly.

Built around the late 18th century, this is essentially a tiny bar (it used to serve only Tetley bitter. Nothing else. I shit you not) This bar is that small that it boasts of being the smallest in Europe.

The pub is a narrow corridor to the side of the bar with two small rooms off it to the right. And this is REAL Manchester, make no mistake. And unmissable.

The beer isn’t cutting edge, The Circus doesn’t do that. What it does do is a nice pint of Tetleys bitter. Always has. Easy drinking and gently bittersweet. This is – however – all about the pub. A true Manchester classic.

Leaving the Circus, turn left and walk across Piccadilly Gardens (I’ll tactfully omit our unscheduled diversion – moral : Always check opening hours for The Jolly Angler!) onto Oldham Street. About 200 yards up on the right is…….

According to the excellent (and all too infrequent – sadly) Pubs of Manchester blog, this pub was built around 1778 and this place – again has a big place in my Beer journey – as the first pub I was refused service.

For no other reason that the landlord was a right miserable git. Fortunately, 35 years later, times have changed. As has the pub.

3 rooms downstairs with the rearmost serving as an intimate live music venue, this gets busy quickly. And it’s a bit low lit. So much so it used to make me think of an ideal Vampire hangout.

Fortunately – as Jock was to discover – there’s a more brightly lit and spacious upstairs room formed when the pub was refurbed.

The beers are split between Robinsons and guests and tonight I went for a Hackney Pale (bizarrely brewed nowhere near Hackney : the brewery name eludes me) it was light and refreshing enough.

Again, this is about the pubs. And The Castle is the one constant presence on that stretch of Oldham Street.

To catch it quiet, you’d have to come early. This gets busy in the evenings when there’s a band on. (I do miss that pool table that used to be in that room….)

Moving on, there are various ways to get to our final planned destination. But we needed a pharmacist…. (nothing to worry about) so we headed right out of the pub and left onto Swan Street to the junction with Shudehill, where we turned left.

And there, opposite Shudehill bus Station and Tram stop is….

(I risked life and limb to take that shot!)

The Hare and Hounds (Shudehill)

Another pub – like The Castle – built around 1778, making it one of the oldest pubs in the city. This three roomed pub (if you include the wide bar area) is tiled heaven. One beautiful interior with lots of wood, stained glass and…. ceramic tiles galore.

And, last night, for the first time ever, I went in the rear room, historically the location for the famous Pensioners Karaoke. A joyful sight and sound.

Like The Circus, this has the clear feel of a local in the middle of England’s greatest city. You get the feeling that it’s full of regulars, chatting and laughing and swapping stories. Friendly in other words.

The beer? Holts Bitter or Robinsons Dizzy Blonde. A beer I can’t stand – on several levels. So Holts it was. And whilst it may have lost bitterness over the years, it was, again, easy drinking. Which was what was required.

And that, my friends, was the (scheduled) end of the walk.

Obviously, being very greedy, we carried on to The Angel and The (mighty) Marble Arch (Stout was exceptional).

A good day. Not a bad beer in sight. And the most beautiful walk between some of Manchester’s classic boozers that you would have to be mad to swerve.