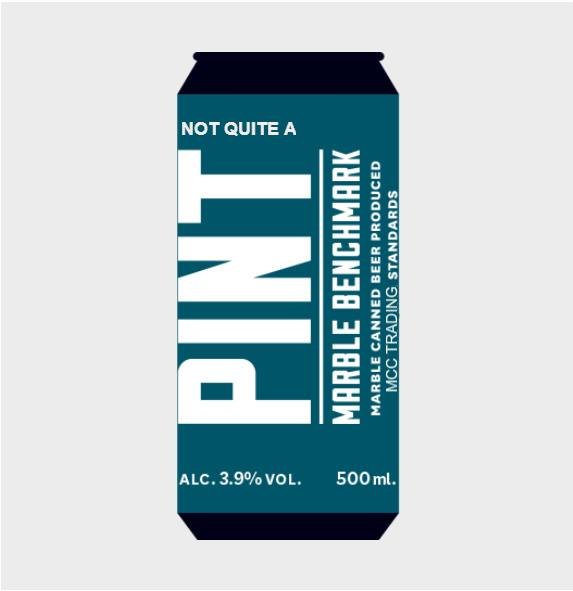 A couple of weeks ago, a little Mancunian corner of Twitter lit up. Just a little corner you understand. About a word.

A measurement. An “Imperial” measurement. How some hark back to those glorious days, when there was an empire upon which the sun never set….

I’m an ardent modernist. I kind of like millilitres. (They make me feel I’m drinking in smaller amounts – until the morning….)

So. Manchester. Marble Brewery, beloved of many, decided to package Pint – an exceptional session Pale Ale – in a can. An industry standard size can. 500ml.

And. One. Single. Person. Complained.

We live in a world where people cling to the past. Where they hark back to a pre-European idyll, to Imperial Measurements? REALLY?

So. Because a product – a beer – has a name “Pint”, it would appear that it would be ill advised to sell it in 1/2 litre cans. Because ONE PERSON reported it as being potentially misleading. Because its name was in bold – and the measurement information was in the same size as most other canned beers.

So. Change size or rename an iconic Mancunian Pale Ale?

Judging by the Marble response to this, it looks like you may not have the chance to drink “Pint” much longer. I don’t know if that will be in small pack, or a complete rename.

If it’s the former, so be it. The lesser of evils. But if it’s the latter, I’d like the numpty who reported this to Trading Standards to reveal him/herself. And explain the thought process that leads to a small business having to change something so special to me – and many many others.

There was no deliberate deception. No attempt to hoodwink. No dark sleight of hand.

Idiot.  Did you not actually consider that – with the Northern preference for a foamy collar – that there may be less beer in your “pint” glass than in the 500ml can?

And for Trading Standards? Why don’t you spend more time prosecuting those who sell shoddy counterfeit goods. Rather than such honestly displayed low hanging fruit.

Do your jobs in other words.

Back soon – hopefully not ranting.

(Thanks to Tim Rowe for the image – completely used without permission!)

The Relevance Of The Good Beer Guide.  The Road To Wigan Beer Festival 2018