“The dark brown shades of my skin only add colour to my tears.

Oh, that splash against my hollow bones, that rocks my soul.

Looking back over my false dreams that I once knew,

A few weeks ago now, I noticed as tweet from one of my favourite pubs of the last 12 months – T he Salford Arms – that mentioned a series of up and coming ‘Meet The Brewer’ events with local Manchester area breweries. The first was with the excellent Privateer with its equally excellent ringmaster / owner, Matt Jervis. I was gutted that circumstances precluded me from attending, I do love the beers that Peter Curran and Matt bang out. Balanced, tasty and resolutely non-ludicrous with that strength!

Black Jack was next with Rob Hamilton. Another top bloke punting out excellent beer. Again, even though I’d been to one at Port Street, I wanted to go, but couldn’t!

However, a visit to my nice bank resolved some of my (ahem) difficulties, so I wasn’t going to miss the next one. First Chop.

I’d had a few of their beers around Manchester. Uniformly excellent they were too. I also popped in recently to their restaurant / bar in Ramsbottom (where it all started). You can read about that here. An assured recommendation for a bar that would not be out of place in the Northern Quarter of Manchester.

Got to say, with an advised 6pm start time, it was a damn struggle getting there on time! But with a hoppy ale at the end, my smiling face (!) presented itself at the bar with an open wallet and lolling tongue. A swift greeting to Tom who runs the bar (and keeps a damn fine pint!) and I had a pint of First Chop ‘Hop’ in my greasy mitt. 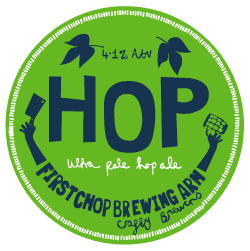 (We also got this later – but what the hell!) – This is a golden pale beer with lots of citrus hop on the nose, lemon up there as well as a hint of grapefruit. Lovely and fruity/bitter in the mouth with a really good body base for a 4.1% abv beer and lots of citrus. This comes from (what I later learned to be) the FIVE hops used (Bobek, Cascade, Chinook, Citra & Simcoe), nice grapefruit in the finish with a touch of piney resin from the Simcoe. Lovely beer that you could drink all night!

At this point, I sensed that Tom was colluding with someone at the side of the bar….so being a nosey (and somewhat cheeky) sod, I introduced myself to Rik Garner, Mr First Chop Brewing Arm himself. And proceeded to cure his insomnia with my incessant waffling and questions!

For quite a young bloke, he’s been a busy boy these last few years! He started out as a chef and founded the bar / restaurant in the mid to late noughties. Having a love of good beer, he developed the yen to make his own beer. So, in 2012, he decide to try his hand at brewing his own beers. He approached Outstanding Brewery in Bury who agreed to let him use some of their spare capacity. The first beer was the Hop I tasted first. The range soon began to expand (as did demand) and the original plan for occasional brewing went out of the window!

So the search for new premises began and to invest in his own kit! Since this summer, Rik has occupied an arch  under the railway off Trinity Way in Salford and commenced brewing with a new 8 Bbl (Beer Barrel) plant.

He’s busy indeed. From that ‘occasional’ brewing idea, he is currently brewing 3 times a week and spends the rest of his time selling and distributing as well as the admin work (which he is still involved with at the bar in Rammy!). The beers are growing in popularity and have won several awards. They are also popping up all over the country from the North East to the South West (and all areas in between!). He has been so busy and successful, that he is having to look to bring someone in – now THERE’S an opportunity! (I offered myself up. I guess that the chuckle fro Rik, allied with the utter lack of technical ability, may mean that I need not apply. Another dream shattered!!!)

Good beer, great company (Rik, not me!) and a cracking pub. Now, where were we…ah yes, the beer!

The ticket for entry cost a whopping £5. For which you receive 4 beer samples. 4 1/2 pints….or so I thought! We settled into the lovely curved front room of the Salford, Rik parked himself, took out his samples and began. He handed out samples of 4 of the 5 hops that were used in ‘Hop’ and encouraged us to give ’em a good rub and sniff. From the Bobek, which was quite subtle and earthy, they got progressively more resinous through to the Simcoe….mmmmmm….Simcoe! Her also brought some of the pale malt that he used in the hop which was lovely Rich Tea biscuit with a dash of Horlicks.

We were furnished each with a half pint of Hop as previously described.

Next up was a bottle of ‘TEA’. Rik seems to name all his beers with 3 letters – AVA is named after his daughter! MIA after her bessie mate…….TEA was simply a damn good Brew! No arguing with that eh? TEA was golden, and at 5% abv, perhaps a shade darker than HOP and was fuller bodied with lovely darker tasting hoppy fruity flavours with a lovely dry bitterness in with the citrus. A distinctive grassy bitter finish. Getting the bottle was a surprise, but I think that Rik wanted us to sample 4 beers. there were only 2 of his on draught. 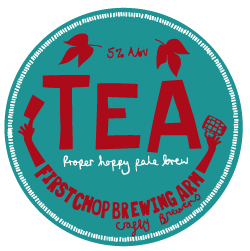 Linda and Pete from Bolton (Good CAMRA members both) arrived and the chat flowed! First time I’d met Pete. It was obvious from our conversations (and his questions for Rik) that – like Linda – he is passionate about his beer! Not sure about his love of bottled stuff, but he, like me, enjoyed the two that Tom produced from behind the bar! The next one being SIP.

A 5.4% abv Pale Ale made with pale malt and loads of NZ hops, this had some delicious and more subtle tropical fruit going on with light grapefruit and lemon in nose and mouth leading to another dry and fruity bitter finish. 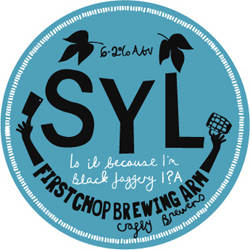 Finally came the darker dangerous delights of SYL. This is a Black Jaggery IPA. Jaggery being an unrefined dark sugar made from Date palm sap. I love the fact that it is named after Syl Johnson, the soul singer who recorded Riks’ favourite album (I’m now gonna buy it today!) “Is It Because I’m Black” a cracking soul tune you can catch here – http://www.youtube.com/watch?v=KxvquwCqC2w The beer it helps to make is indeed dark and dangerous. A spicy nose with more than a hint of licorice, there is the flavour of dark vine fruits in the mouth with more licorice in a dry, pleasant, slightly herbal finish. Beautiful beer, but hardly advisable on a school night!

This was unfortunately sparsely attended for such a good brewer (and engaging personality), but the lack of attendees led to a far more intimate feel that the events at Port Street. This meant more time to chat with Richard, Pete & Linda (which was a pleasure) and some of the other attendees. A cracking finish to a great (if slightly tipsy) evening! That’s be the SYL then!

For a fiver, this was an absolute steal. Let’s hope more come for Hornbeam Brewery, next Wednesday!

Even though the bulk weren’t at the MTB, it was nice to see The Salford busy midweek. Tom and the gang are obviously doing things right. I can say for sure, that he knows how to keep a pint! Just make sure there’s food next week….I was damned hungry by the time the 37 deposited me outside Beers Mansions!!!

On that note….’til next time…